CHOOSE ONE OF OUR DOGS 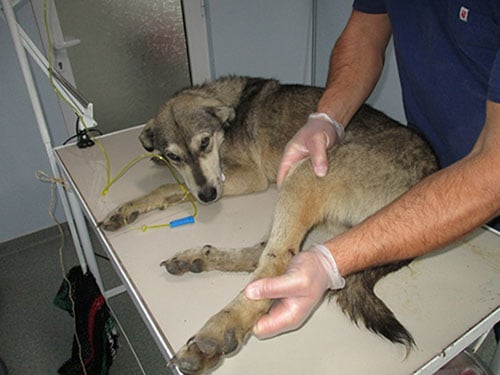 BUCK was rescued from the street after being hit by speeding a car. We were contacted by an individual who had witnessed the horrible collision. Moments later, our Rescue Team arrived at the scene to transport Buck to our clinic. Buck was lying on his side, urinating and shaking uncontrollably as he was being helped.

Due to lack of equipment in Galati’s veterinarian clinics, Buck had to be driven to another town to have x-rays taken. We were thrilled to learn that Buck’s injuries were not life-threatening and that he would be able to walk again.

For days Buck lay on his side while we treated his wounds and administered injections. After the pain subsided, Buck began therapy. Our staff moved his hind legs manually and helped him perform special exercises every day to help his recovery.Not long after we published Buck’s story on social media, he was wanted for adoption by a lady in Germany named Sabine.

Unfortunately, Buck’s Snap Test revealed that he had heartworm disease and had to be treated before he could be adopted.
Buck was treated for heartworm from the proceeds of our international heartworm fundraiser; however, we were all terrified that we had diagnosed the fatal disease too late.

It was a great relief to learn that Buck was no longer infected with heartworm disease, and was adopted immediately by Sabine from Germany on October 12, 2017. Today, Buck and Sabine are inseparable, and living in harmony together!

Because of your generosity, Buck will never be exposed to dangers on the streets, he will ever be forced to chase/hunt for food or eat trash! But there are so many other homeless dogs like Buck, waiting for us to save them!

Help us help them!

“I fell for Buck the moment I saw his pictures. I just knew in my heart that he had to be part of my life. Adopting Buck (my cuddly bear) is one of the best decisions I’ve made. He is such a gentle and calm soul, and we’re getting along so well, and he is loving being part of my pack! He’s such a clever guy. I wish and hope to have a lot of amazing years together with Buck.”

(SOME OF) OUR DOGS IN NEED OF A SPONSOR

They’ve all been living on the streets, exposed to unimaginable dangers. Today, they are safe with us in our ROLDA sanctuaries, waiting to be adopted in a forever home.Will you sponsor one dog’food, medical care and safe sheltering? (Click on a dog profile to read more about her/his story)

Your impact when making a one time gift

Your impact when making a monthly gift