Choose one of our Dogs

FROM WANTING TO DIE TO WILLING TO LIVE: A STRAY’S STORY OF REVIVAL 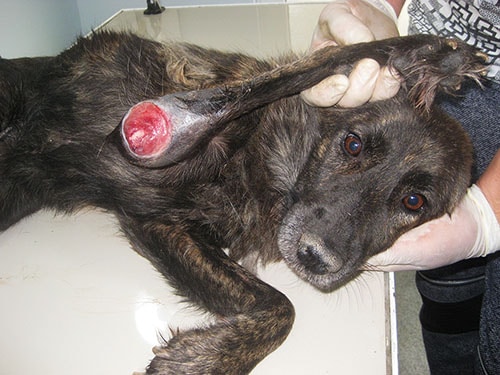 BAR was discovered behind a bush whimpering softly and breathing erratically as if he no longer had the strength or the will to communicate his agony to the world…as if he literally chose this spot to spend his dying days…alone, as if not to disturb the world around him.

Perhaps it was a relief for Bar to be leaving this world. A world that welcomed him, like every stray, with cruelty, loneliness, and injustice. A world that forced him to starve…to endure sickness…to suffer unjustified ignorance and torture…basically, a world that treated him unfairly without any reason whatsoever.

But then we found him…and introduced an entirely different world full of kindness, compassion, and love. We gave him a reason to fight. And he did.

The wound on his leg seemed to be about a week old. Bar’s deteriorating immune system prevented him to have immediate amputation surgery. For two weeks he refused to eat anything. The vet treated him with painkillers, antibiotics, and intravenous food to prepare him for surgery.

Shortly after he began his treatment, Bar’s appetite reappeared. Not only his appetite for food but his appetite for life. Today, Bar is eating normally and in a few days, will be fit to undergo the amputation surgery. This is the first and the most important step in his recovery.

And we will be there with him. Always!

BUY A GIFT THAT SAVES LIVES

Buck Story: From a paralyzed stray dog to a spoiled pet in Germany. Click on any of BUCK's gifts to make a change for another dog in need.

Generous supporters helped us to save others dogs like

HERA‘s body was covered entirely in tar when we rescue her. Thanks to ROLDA supporters, Hera’s wounds were completely healed and she left Romania behind, living safely in Finland.

CHICK was found malnourished, dehydrated, with severe skin problems that made her entire body itchy and painful. Chick now recovers in a safe, clean shelter where she will be forever loved.

CARA is a 3 months old puppy who already suffered too much: Abandoned to die after being hit by a car, Cara suffered temporary paralysis of back legs. With proper medical care and therapy, Cara was able to walk again.